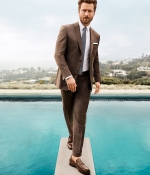 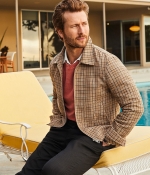 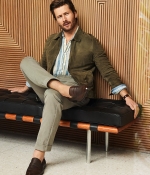 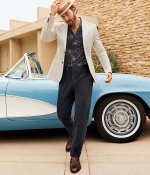 Ahead of his appearance in the much-anticipated sequel, the skyrocketing star tells us what it was like sharing the screen with Tom Cruise and the extra special accessory he wore on set.

“A lot of my personal style actually comes from the original Top Gun. Growing up, the movie was as cool as it gets, so during filming people couldn’t tell if I was dressed for the movie or in my actual clothes.” –GLEN

When did you first see the original Top Gun?
My dad introduced me to it when I was 10. I think for fathers and sons the movie is sort of like teaching your kid baseball. Every dad wants to pass it along. Right after watching it, I signed up for acting classes. There’s probably three movies that are responsible for me being an actor and Top Gun is at the top.

What was the best part about working on the reboot?
Getting to work with Tom Cruise. I basically got Tom Cruise film school every day on set. He’d tell me to watch a movie, I’d watch it that night and then we’d talk about it the next day. For an entire year I got to learn how he makes movies.

How would you describe your personal style?
Anyone that knows me, knows I’m a jeans, boots, T-shirt, baseball hat and aviators kind of guy.

What’s the boldest fashion move you’ve ever pulled off?
For my 31st birthday I threw a tracksuit tequila party. I wasn’t sure if my friends were going to be down for it, but we had 400 or 500 people in tracksuits and it was one of the best birthdays I’ve ever been to. Tracksuits really set the right vibe and are maybe my favorite spring trend. Tracksuits are back, right?

What’s the coolest thing you wore on set?
My grandfather was a naval medic, and I have his dog tags. I’d actually been wearing them for two years prior to even auditioning and then when I got the part I wore them throughout the entire movie. They’re the one accessory I never take off.

What was your favorite look from the Mix Masters shoot?
The checked jacket and sweater because I was told I reminded people of Paul Newman in it. He’s one of my idols. That old-school style is what I’m aiming to re-create. I try to be very precise and deliberate about bringing that timeless look back because I don’t think many people are doing it anymore.

Why were you excited to work with Bloomingdale’s?
It’s a store where I can get everything I like without having to go anywhere else. I can find all the brands that I know fit me well in one place.

What’s a memorable experience you had visiting the store?
Going in with my buddy Tan France from Queer Eye. Whenever I’m shopping with him I always end up looking better than if I went solo.

Be honest: Is your ringtone “Danger Zone”?
It isn’t my ringtone, but it is currently set as my alarm. [Source] 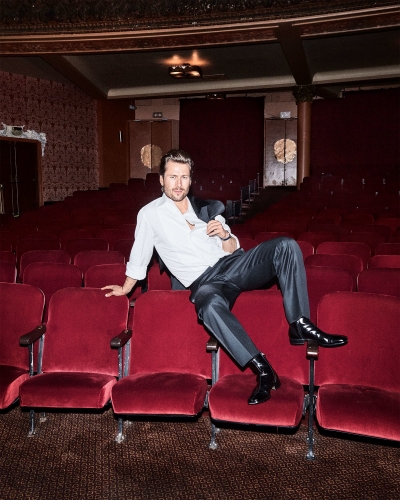 In the fall of 1931, F. Scott Fitzgerald and his wife, Zelda, returned to the United States after spending much of the ’20s abroad. They found the country much changed. Having left the Champagne-soaked festivities early, by the time they returned, all that was left was an empty dance hall with glitter on the floor. They’d been so busy careering around Europe in a dizzying cloud of cocksure charisma—and personal drama—that they didn’t notice the moment things began to unravel. After the stock market plummeted in 1929, the Fitzgeralds were on holiday in North Africa. As Fitzgerald later wrote, “We heard a dull distant crash which echoed to the farthest wastes of the desert.” But they kept drinking, seeing no need to sail home. The crash echoed through their lives nonetheless. That year, Zelda’s mental health declined, and she checked into the Swiss clinic Les Rives de Prangins, where she scribbled letters about spending her days “writing soggy words in the rain and feeling dank inside.” Fitzgerald, for his part, was unable to finish his next novel. When they finally arrived home on a steamer, Fitzgerald wrote, they found that several of their most buoyant friends had also begun to sink. “Somebody had blundered,” he wrote in an essay that year. “And the most expensive orgy in history was over.”

It is never easy to pinpoint the exact moment that a party begins to wind down. But, as Fitzgerald noted looking back on the Jazz Age, the party is usually over before anyone notices. It is ending all the time, from the moment someone kicks off their first heel. Decadence—that state of ecstatic, almost sublime decay—is really just opulence with an expiration date. Fitzgerald wrote that friends were living far beyond their means, and they knew it, and they simply didn’t care. “Even when you were broke you didn’t worry about money, because it was in such profusion around you,” he wrote. “Now once more the belt is tight and we summon the proper expression of horror as we look back at our wasted youth.”

We are living in the ’20s again. But our times are not roaring; at least not with giddy, boozy elation. Who can afford the performative nihilism of doing the foxtrot into oblivion? Wasted youth is a privilege, one that so many young people today cannot access; the planet is crumbling, right-wing extremism is on the rise, wealth disparity is worse than it has been in a century. (This we do have in common with Fitzgerald’s time.) The party is very much over—or at least the record player is snagging and people have started to grab their coats. The biggest drinking trend among people under 30 these days is sobriety. If fashion is flirting with decadence—the recent runway shows glittered with grandiosity and razzle-dazzle—then at least this decadence is gimlet-eyed and somewhat sobering. There is a kind of winking meta-maximalism happening at the moment; a luxury that knows itself and its own limitations, knows how precarious it all is. Fashion is having riotous fun, but it is not blithe or indulgent. This is sartorial raging against a dying light; this is eating a chocolate cake at two in the morning because who can say when the sun will rise?

In entertainment, we are in a clear period of heady excess. The streaming revolution has led to an explosion of new stories with monumental production values—and opportunities for fresh faces seeking stardom. This may be a scary time to be a person, but it is an excellent time to be in Hollywood; there has never been a more diverse, textured, exciting array of projects and talent, with real money and energy fueling their development. How long can it last? No one can say, but for now, we should revel in it, and in the thrilling crop of newcomers that have bubbled up in this new era. So what if the party’s dwindling, let’s dance. [More at Source]

Glen stepped out yesterday looking handsome as hell with his new haircut to attend the InStyle & Warner Bros. 77th Annual Golden Globe Awards After Party. I’ve updated the gallery with photos from the event. 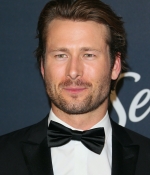 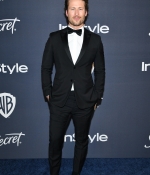 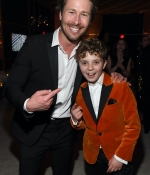 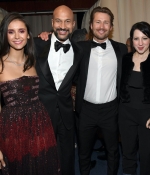 Glen was in attendance yesterday during the Chanel Dinner celebrating Gabrielle Chanel Essence and hosted by Margot Robbie. Make sure to head to the gallery to see all the photos. 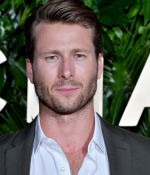 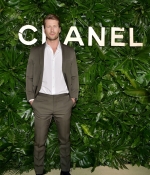 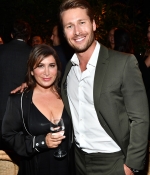 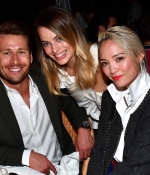 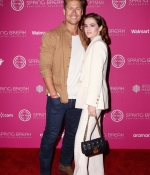 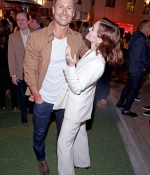 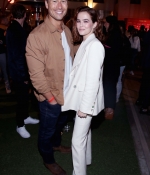 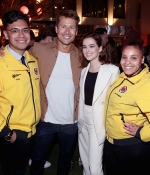 Zoey Deutch and Glen Powell are re-teaming with the filmmakers behind Set It Up for a new Netflix romantic comedy.

Tentatively titled Most Dangerous Game, the movie comes from Set It Up scribe Katie Silberman. She will produce alongside Juliet Berman and Justin Nappi of Treehouse Pictures. Along with Set It Up, Treehouse’s credits also include the Michael B. Jordan starrer That Awkward Moment and Iraq war drama Sand Castle, starring Henry Cavill and Nicholas Hoult.

Most Dangerous Game will go into production in early 2020, with Deutch and Powell also on board as exec producers.

This is the latest rom-com reteaming for Netflix, which has already set sequels for The Kissing Booth and To All the Boys I’ve Loved Before. But, while plot details are not yet known, Most Dangerous Game will not be a follow-up to Set It Up.

“While it was clear that audiences were clamoring for a sequel, we are excited by the thought of creating a new, distinct film that explores different romantic comedy tropes while still being anchored in everything that we loved about the first movie,” said Nappi.

“It will be exciting to see Glen and Zoey do something completely different,” added Berman. “We all talked about what we could do again and [Most Dangerous Game] was something that Katie brought to us that was creatively exciting as a next project and we jumped on it.” [More at Source]

Reel Stories, Real Lives is an intimate celebrity-packed event that celebrates the impact of MPTF on the entertainment community. Held annually, the event highlights the extraordinary services provided by MPTF by telling powerful stories of entertainment industry members who have benefited, written and performed by Hollywood’s biggest and brightest stars. The evening raises awareness, entertains, and educates with personal journeys that speak to the world. Glen was one of the participants of last night’s gala! Check out the gallery for photo coverage of the event. 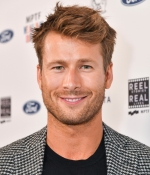 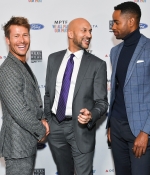 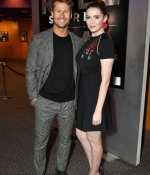 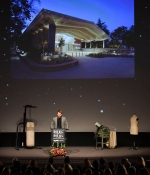 I’ve updated the gallery with photos of Glen attending the premiere of “Sierra Burgess Is A Loser” in LA. 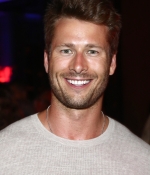 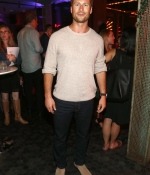 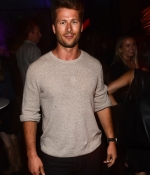