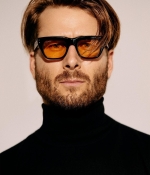 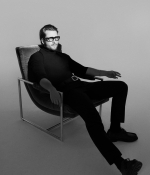 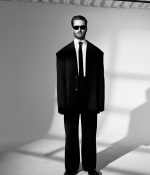 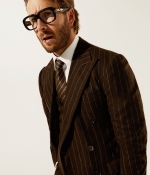 It’s a warm, early fall evening in New Orleans, and the cast and crew of Hitman, a forthcoming Richard Linklater-directed movie starring (and written and produced by) the actor Glen Powell, are just gearing up for a night that will stretch until 4:00 AM. To keep everyone fueled into the morning, Powell and his co-star Adria Arjona have paid for a visit from an espresso truck. After approaching the bright red truck and ordering a coffee through the window, Powell, dressed in the dark clothing he’s wearing for that night’s scenes, heads back towards the set. As he walks away, the barista, a wave of familiarity washing across her, poses a question to those still in line. “What was the name of that guy? The good-looking one in the shirt? I recognize his face.” A few moments later, it will dawn on her: “That was the friggin’ hottie from Top Gun!”

This seems to be happening to Powell more frequently, since donning a jumpsuit as Jake “Hangman” Seresin in Top Gun: Maverick. Not just getting recognized, which happens two or three times a day now, Powell says. But being almost recognized, which suggests something a little more interesting: that Powell is the sort of actor who is right on the cusp of being absolutely everywhere. (An Austin native and lifelong University of Texas fan, Powell recently approached UT legend and former NFL quarterback Vince Young to tell the QB that he was a fan, only to have Young give him a quizzical, confused look. Later, Powell opened up Instagram to find a DM from Young: “Dude, sorry, I realized you were the guy from Top Gun while we were talking.”)

If you were one of those who knew of Powell before he was friggin’ hot in Top Gun, it’s likely from one of the many well-played supporting roles he’s had in recent years: as one half of the enduringly likeable couple in the Netflix rom-com Set It Up; as a witty, cerebral 1970’s college baseball player in Linklater’s Everybody Wants Some; as John Glenn in the Best Picture-nominated Hidden Figures. But it was playing “Hangman,” an arrogant hot shot you’re not supposed to like but who’s so square-jawed and charming you can’t help but root for anyway, that subjected his Hollywood ascent to increased G-forces. [More at Source]