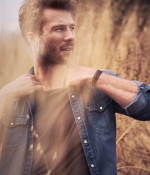 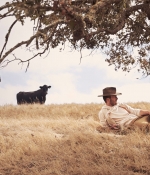 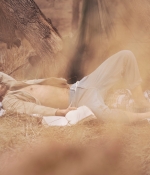 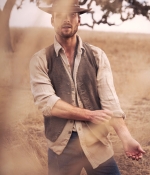 Whether piloting jets or landing on the moon, Glen Powell is unabashedly soaring to new heights. Continuing his supersonic streak, Powell gears up for his long-awaited blockbuster—Top Gun: Maverick. “It’s the greatest version of icing the kicker… ever,” jokes actor Glen Powell reflecting on the twice-delayed debut of the highly anticipated Top Gun: Maverick. Having completed filming in 2019, the release of the epic undertaking from Paramount Pictures was put on hold due to the pandemic. Without batting an eye, Powell promises that the film, which is now set to hit theaters May 27, will be well worth the wait. “This movie delivers on every level. It’s like nothing you’ve ever seen. It’s a true testament to why movies are made.”

Originally from Austin, the charismatic Powell studied at the University of Texas at Austin at the Department of Radio, Television and Film. Cultivating his craft from an early age, Powell first sank his teeth in the biz with smaller roles on television and in films. It wasn’t long, however, before he started making a name for himself on the scene. He secured a part in the Denzel Washington-directed movie The Great Debaters, which Powell credits as the role that gave him the confidence to know his childhood dream would in fact turn into a tangible career path. From there, it was game on.

Spanning from The Expendables 3 to Hidden Figures, Powell has shared the spotlight with some of the most iconic names in the industry—Sylvester Stallone, Wesley Snipes, Octavia Spencer, Kevin Costner—need we say more? He has certainly found himself on the ride of a lifetime. When asked what has really struck a chord throughout his experience thus far, the charmer notes, “Kevin Costner really took me under his wing while we were filming Hidden Figures, where he shared something that has stuck with me. He [said], ‘As an actor, you have a beautiful responsibility for putting stories out in the world.’” From that point on, I started to look at and read scripts differently, making sure I would be proud of the ideas that these films represent. I just try and be really deliberate about my choices.” [More at Source]