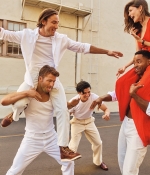 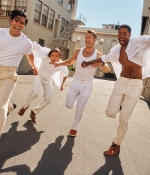 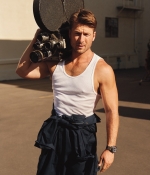 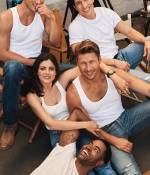 Cruise and director Joseph Kosinski wanted real stunts with cameras capturing actual flight patterns, so the star curated the training he wished he’d had back in 1986. “In anyone else’s hands, Top Gun is a CGI movie,” says Powell. “Only Tom puts real actors in real planes.” The aircraft were flown by pilots, but the cast were in the cockpit for such long, intense stretches that sometimes they had to do what they had to do: “I peed in the plane a few times,” says Ellis. “I peed in the plane almost every time,” says Pullman. The actors trained for three months in a progression of aircraft, then did maintenance flights for g-force tolerance. “Tom would go first,” says Ellis. “And then we’d have to go up there and try to keep up with what he just did.”

Fans of the original Top Gun’s immortal beach volleyball scene will be relieved to hear that our new heroes find time to play shirtless football on the sand. The younger actors worked out and skipped carbs for months to prep—and did some last-second moisturizing so their muscles would glisten. “I was eventually cut off from the baby oil,” says Powell. After sunset, the cast celebrated with wings, tater tots, and beer, but later learned they had to shoot the scene again. “We were devastated,” Ellis says with a laugh.

Moviegoers everywhere will thank them for their service. [Source]